On this page, you'll find a high-level introduction to how IOTICS handles Identity.
For further information check out our Identity Specification.

Decentralised Identities are an emerging effort for establishing a standard for self-sovereign digital identities. They provide entities - users, agents and twins - with the ability to self-manage cryptographic key material and other metadata to prove ownership of their identity. This data can be used to authenticate an entity to third parties or to request authorisation for access to a given resource.

IOTICS' Decentralised Identities are built on the W3C Proposed Recommendation, click here to read it.

The root of each identity is a cryptographic key pair, made of a private and a public key, both created from a Seed and a Key Name.

The public part of the key pair is hashed to produce a public identifier - which we'll be referring to as DID Identifier or simply, DID. The DID usually looks like this did:iotics:iotLPFgE1Q5x31dpUAKUWemywwttHmC6Zzfs.

Before we move forward to the authentication and control flows, have a look at our Terminology.

The entities within the IOTICSpace are:

In IOTICS, we'll always talk about delegation. A delegation is a statement of consent from a user or a twin towards an agent.

The user delegates its authority to the agents so they can authenticate requests against an application or against the IOTICS host on its behalf.
The delegation is recorded in the DDO and managed by the user. A user can temporarily revoke or entirely remove the delegation. 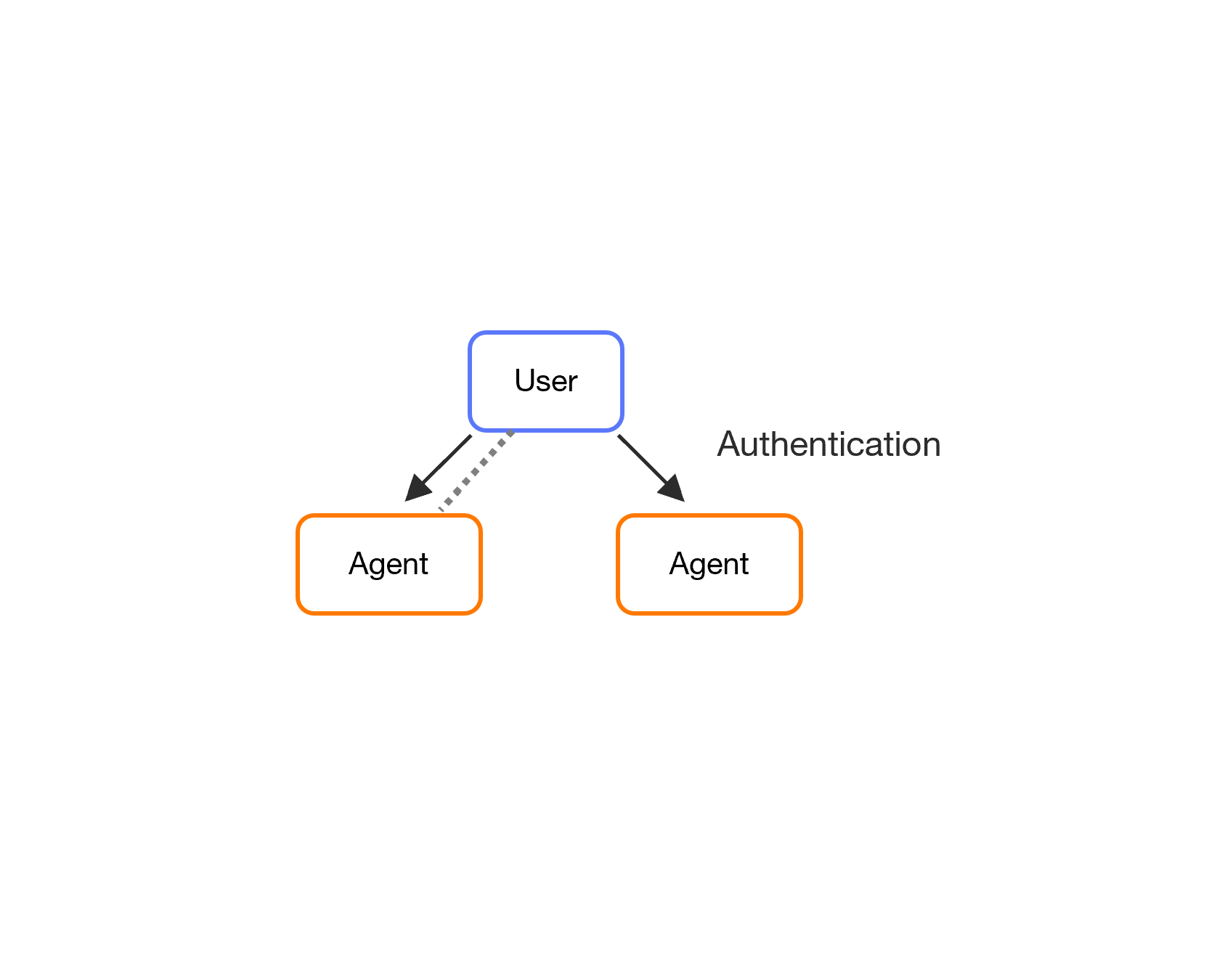 The twin delegates its control to the agents so they can create and update their metadata in IOTICSpace and publish data over the twins' feed. We call this action control delegation. 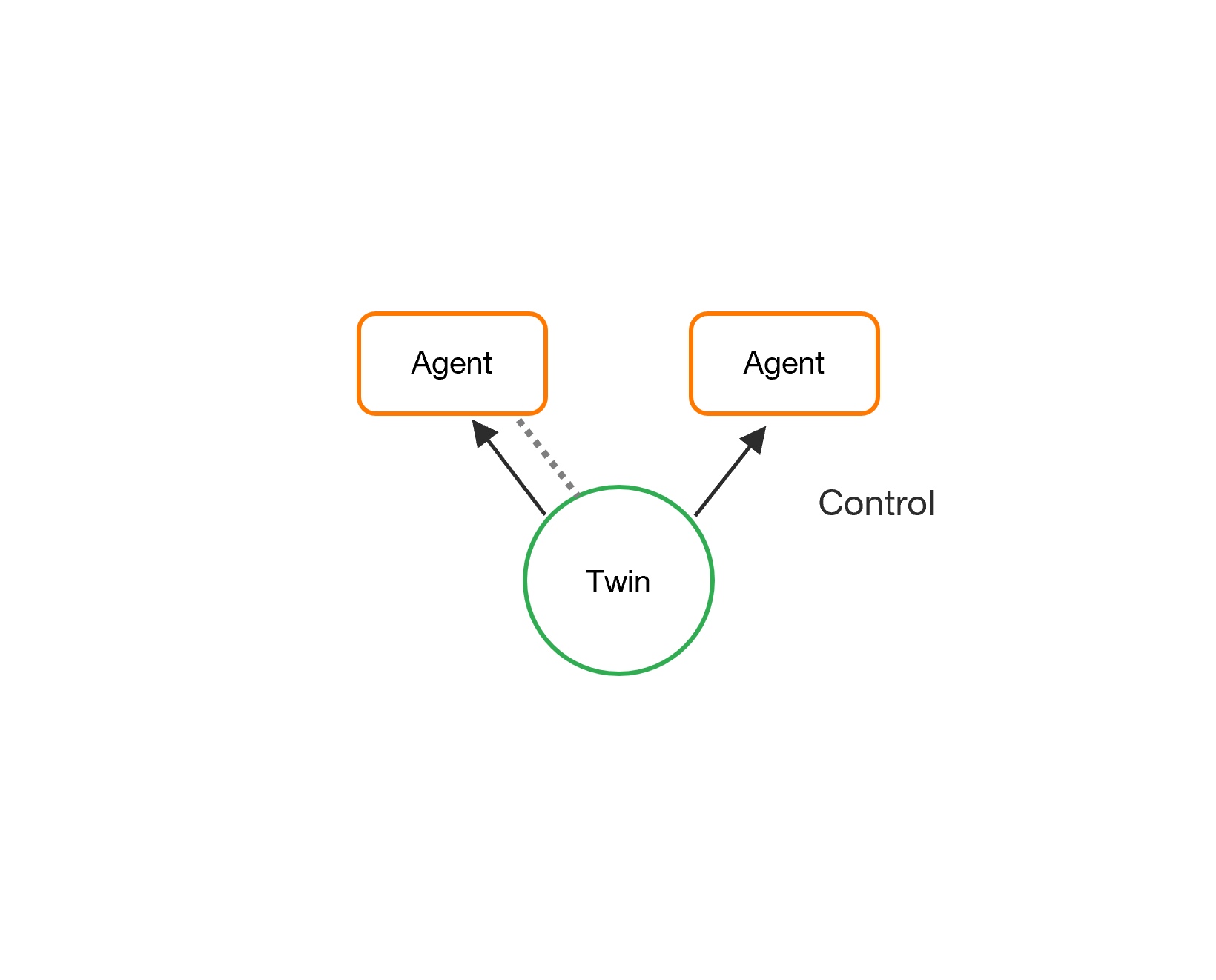 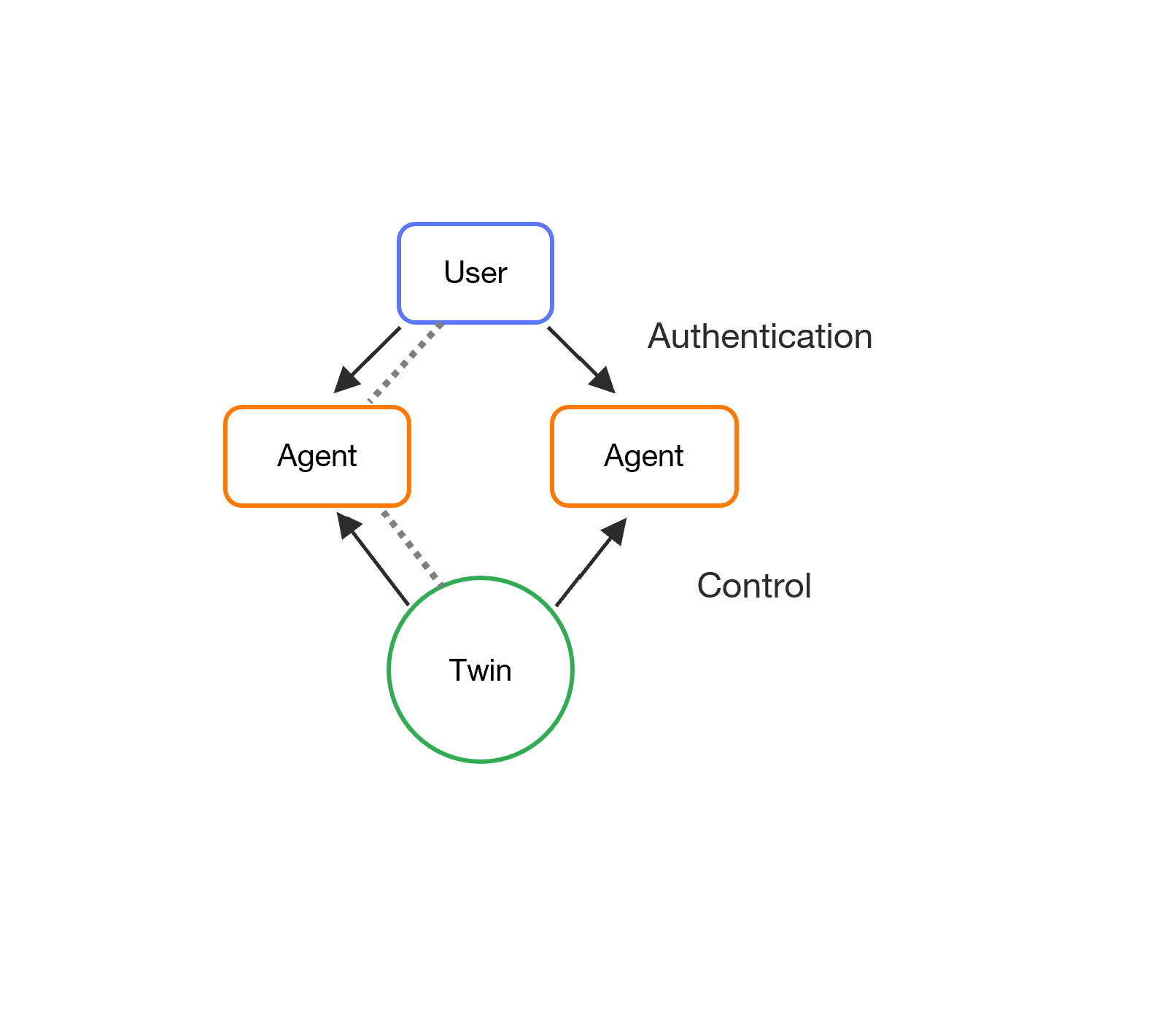 Controlling a twin means the ability to manage its metadata, publish feed data or subscribe to inputs. This is different from sending a control command to a device by its twin to actuate a function. This is implemented with the Input interface and is contextual to the use case.

Below you'll find the authentication and the control delegation steps. 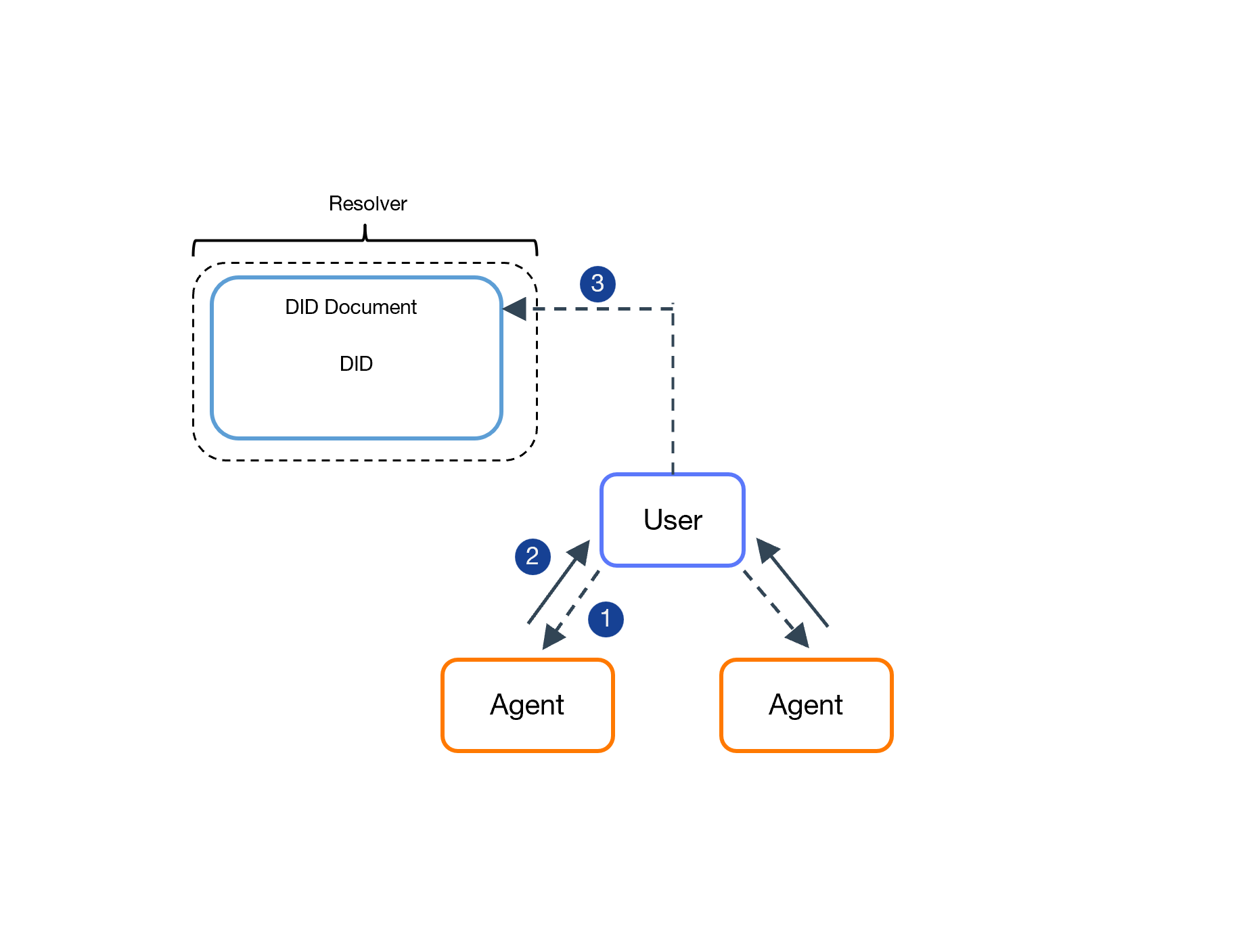 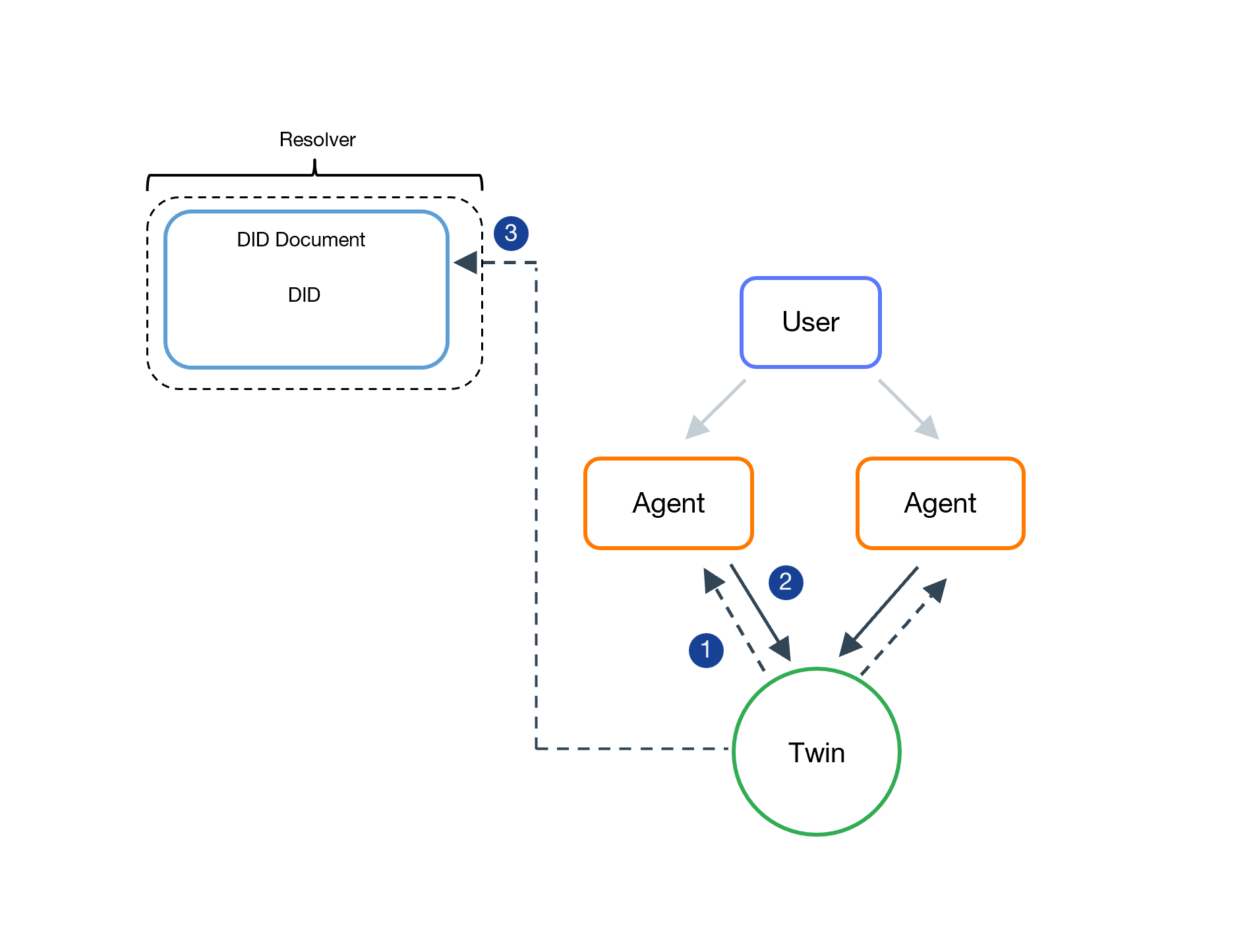 This is how the overall verification between the user, agent, twin and the Host happens. 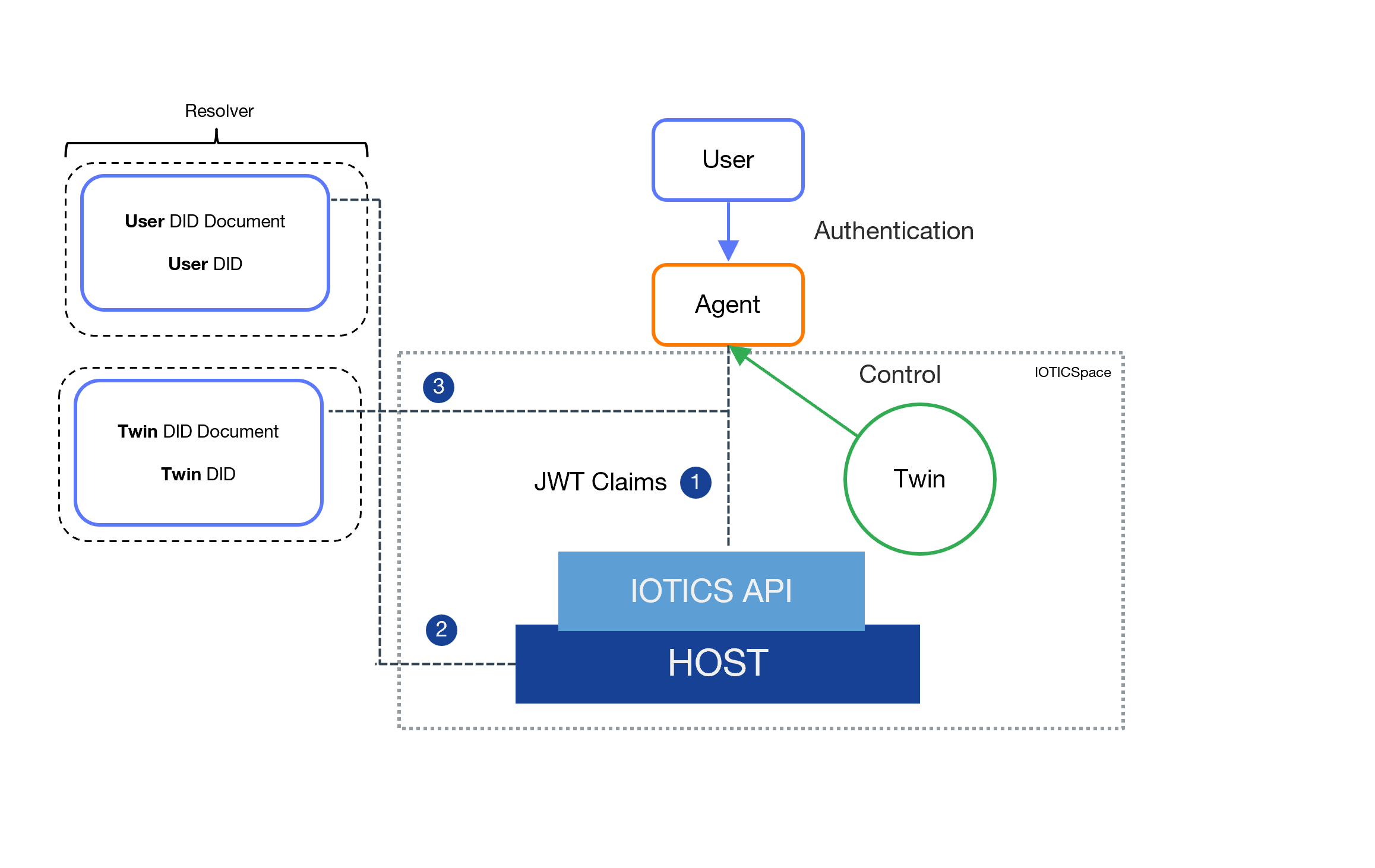 To see how to create User and Agent decentralised identities, click here.
Creating these credentials is a prerequisite to work with the IOTICS API. For more information on the Identity Library, specifically, click here.